Back
The jubilation feelings given by forms and colors of Asbjorn Lonvig
By French author Alain Joannes, Paris.
From the book "Comment communiquer par des images".


The art of the Danish painter Asbjorn Lonvig communicates at the first glance euphoria in a rough state. A so intense euphoria that the glance can not move away from the piece of his art.
Of course, the saturated colours are decisive in this very great glowing. The coloured dazzling and the feeling of pleasure which prolongs it have multiple causes.
As adequacy between artistic creation and the constraints of communication, the art of Asbjorn Lonvig illustrates an assumption of neurocognitives sciences: the neurons in charge of visual perception are first activated by patterns recognition, then by colors recognition, then by recognition of textures and movements recognition. In a piece of art like "Soul hurting still ", the sensory impacts of the forms and the colors are very strong and equal. The pleasure comes from what the eye and the brain receive from the red, the yellow, the green and blue at the same time as they recognize the squares, the rectangles, the circles, the triangles, the straight and broken lines and even the letter “A”.
The glance thus filled by a profusion of feelings founds a generating mental state of pleasure.
After and beyond the primary emotion, in a second phase of contemplation, the spirit endeavours to confer an overall significance on the table. It calls upon its repertory of already memorized forms. Then, the pleasure becomes ludic. Functioning like a rebus, the chart of an unknown territory, a coded language or a mysterious diagram, the piece of art asks to the witness: " What am I ?"
The many possible answers are mental resonances which give to the artistic communication a richness higher than all the other ways to communicate.
This communication is intersubjective. It organizes the meeting between the subjectivity of the artist and the subjectivity of the witness.
The witness of the piece of art is free to refer to tropical sensory prints: association of a dominating solar yellow, sky blue, deep vegetal green. He can also associate the table with an intimate collection of primitive art. He shall perhaps remember the geometrical abstractions of Kandinsky and Mondrian. Surely, the piece of art will be kept in the long memory space into the brain with all its resonances sensory, emotional, ludic and cultural. It is may be interesting to know that the joyfull impact piece of art by Asbjorn Lonvig is closely related to its is canvassed artistic. High level data processing specialist then head of a software company, the painter found serenity in a pictorial creation which starts with digital drafts and finds its completion on a support – frame and fabric - entirely conceived and manufactured by the artist. 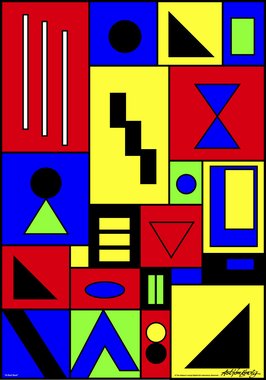 Asbjorn Lonvig demonstrates a clear predominance towards a geometrical approach, using flat contrasted colours, emphasising perceptions which come close to being pop art. The oeuvre of the well-known Danish artist involves symbols, icons of a society dominated by images, decontextualising them, inserting them in other compositions in which their freshness and dynamism are emphasised. He produces formal assemblies in which sensitive ideas, infantile allegories or non-hurtful subjects, predominate, seeking in the style of Miró an evocative approach little-by-little shaping a world of great sensitivity which captivates the observer with an attractive warmth in spite of its initial lack of emotion.

His contribution to painting extends further than the field of composition, cultivating form, fostering the passionate use of colour in order to endow his painting with suggestive features which go beyond the limits of the subjects themselves.

He communicates irony, gives expression to immense innate curiosity connected with his tendency to experimentation, but always subordinating it to compositional organisation, seeking a clear dialogue between form, colour, balance and tonal expressiveness.