Back
born in 1940, grew up in Münsingen in the Aare valley. He asserts that it was this landscape that made the greatest impression upon him: His initial countless attempts at portraying plants and animals already filled entire booklets during his time at school.
Even his parents' house was considered to be a place of reflection on nature. Small Hans' father was his first teacher on the pathway to becoming an artist. He tramped tirelessly through his beloved landscape with his son. All of its diverse inhabitants were true friends for him. He never tired of watching their mannerisms, nor discovering their hidden idiosyncrasies. There was no better way to relax for him, and therefore also his son, than to investigate nature in this way, driven by a deep sense of affection.
Münsingen's fire-fighting ponds became very important for Hans Rüttimann, the schoolboy. It was here that he often retreated for hours every day to observe the small world that abounded here, thanks to the still water: Swarms of mosquitos ascended and glimmered in the sunshine. Dragonflies danced tirelessly above the water lilies. The mayflies made the most of their brief existence. Pond skaters darted zealously across the water's surface. The backswimmers rose up to the surface to breathe. The great diving beetle showed its beauty. Carp swam around the ponds with regal unhurriedness.
The artistic work of Hans Rüttimann is filled with gratitude for having had such a youth. When growing up, he was still able to experience a bucolic paradise in which people and animals lived together closely in a natural kinship. 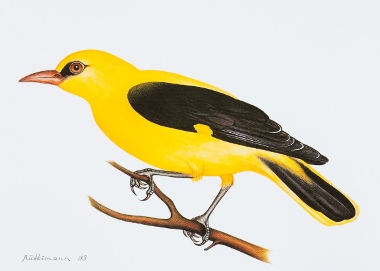 And to this day, Hans Rüttimann has remained faithful to the world of nature in the former Aare valley that was introduced to him by his father. "Throughout my life, animals have always been the subject of my drawings", is how the artist puts it. He still regards landscapes that are filled with all manner of creatures as well as zoological gardens, like his cherished Dählhölzli Zoo, as his favorite places.
When Hans Rüttimann draws or paints an animal, he does it with great respect for the wonders of creation. He strives to understand his models "from within"; the reasons for their behavior, the unique expression of life that differs for every animal, their importance within the interplay of nature's forces. The animal artist studies the anatomy of his living models with hard work, persistence and meticulousness; Gotthold Lessing would have termed such diligence: true attention to detail. 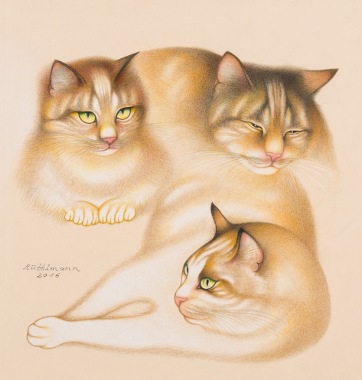 The infinite number of shapes in the animal world is immense for us humans, and it only remains possible for an animal artist to specialize in a few shapes from this animal kingdom.
Accordingly, it became the love of the cat that became the central theme of Hans Rüttimann's artistic endeavors. For him, this animal represents the ultimate in beauty, elegance and agility. With their highly developed senses, cats radiate something that is incomprehensible and intangible. And Rüttimann's pictures also radiate this "mysteriousness".
Sometimes Rüttimann and his cats also repair to surreal-looking worlds in order to have them enter into an apparent interplay with the heightened sense of reality that prevails there. However, the noble cat form is always retained, and is becoming a true feline queen in a realm of the fantastical and dreamlike, where human reason and logic cease to render their effect.

Sergius Golowin describes the nine animal species appearing in the book as friends of the artist: from the hidden life of the core biter to the fantasies about friend cat to the mysterious behavior of the hedgehog, the viewer recognizes much that is familiar, but also unfamiliar.
Sergius Golowin (1930 - 2006), son of a Bernburg poet and a Russian sculptor, grew up in the then still romantic Bernese district of Mattenhof. The main stimulators of his later work were his parents and grandparents, all of whom loved, collected and retold folk traditions. He learned the profession of a librarian in Bern and Burgdorf, mainly in the field of local history and folklore. Later Golovin lived as a freelance writer and sought-after speaker in the middle of a natural paradise in Allmendingen in the Aare Valley. Golovin published over 100 books, including the 1989 Goldmann Verlag Munich work "Goddess Cat. The magical animal at our side".
For decades, Golowin and Rüttimann met regularly in Bernese Beizen (pubs) to chat about God and the world. Rüttimann was fascinated by the inexhaustible knowledge of Golowin, who was also a great animal expert and nature observer. A friendship soon developed between the two, with Golovin having an inspiring effect on Rüttimann's artistic work. So it was obvious to let the exchange of ideas of the two about the world of animals, which is strange to us, flow into the book about Hans Rüttimann's work.
One finds the book in the Internet, so also via www.abebooks.com. In addition, last, unused copies are available from the artist.