Back
His interest in arts showed early, because instead of following the class, he preferred to form his teacher out of play-dough. His moderate success at school, of course with the exception of arts and music, was met with a lot of understanding by his parents. 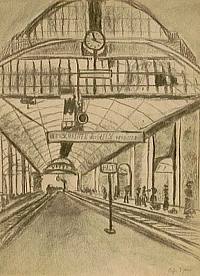 Drawn by Peter Janssen 1914 at the age of 8 years only.
His grandfather (Johann) Peter (Theodor) Janssen 1844 - 1908
They knew that their son Peter was going to follow in the footsteps of his grandfather, the famous director of the Academy Johann Peter Theodor Janssen (1844-1908). He was well known as a painter of historical scenes. A lot of them can still be seen in public places such as the university of Marburg or the town hall of Düsseldorf. 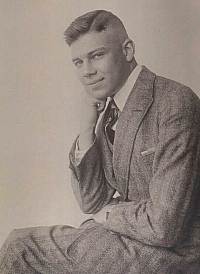 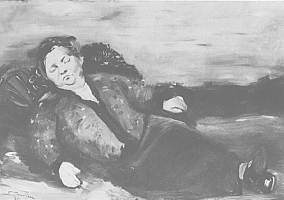 Peter Janssen as a young man.
Johanna (Mother) Ey.
Painted by Peter Janssen in 1929. The original is owned by the art museum in Duesseldorf
In winter 1925/26 Peter Janssen joined “Das junge Rheinland”. This artist-association grouped around Johanna Ey, was established in February 1919 by Adolf Uzarski, Gerd Wollheim and Arthur Kaufmann.

The group did not claim any particular style. The only condition was youth and honesty in creativity. Youth , well understood referring to the power and freshness of the artistic drive and not age.

In 1968 Peter Janssen writes in a letter: “ Das junge Rheinland was and is frequently confused with the circle around Mrs. Ey. But they are the same painters and sculptors I myself joined “Das junge Rheinland” in winter 1925/26. Yes. The reasons were to be seen in the style of painting why one became a member, today hard to comprehend.

Wolheim, Max Ernst, Jankel Adler, Kurt Georg Becker, Jean Paul Schmitz, Bruno Goller, Matthias Barz, Scheswig, Barth, Julo Levin - who is forgotten completely, he was murdered by the Nazis - Pudlich, Pankok were the people with whom I had contact… “Das junge Rheinland” really was an assembly of painters and sculptors, which met daily at the Ey around 11.00 a.m.” 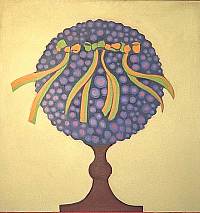 Before a party, 1966.
This painting is typical for his Berlin period.
When Peter Janssen left his hometown Düsseldorf in 1957, he followed the offer of a post as Professor at the Academy of Fine Arts in Berlin. Initially he headed an elementary class taking over the painting class later on. From discussions with his students it becomes evident that Peter Janssen taught more as confident than just artistic skills. With a lot of intuition and understanding he took care of the artistic and personal problems of his students. The Berlin period does not only represent a chapter of his personal life but also a new chapter in his artistic work.