Back
Cuba, the home of Ricardo Ponce, is a country with an extraordinary history and many charismatic personalities, but also a country full of opposites and difficulties.

His tender monsters tell us the story of the politically schizophrenic life of Cuba, of everyday stories that are not for the faint-hearted and that sometimes brutally show the absurdities of the Caribbean idyll. 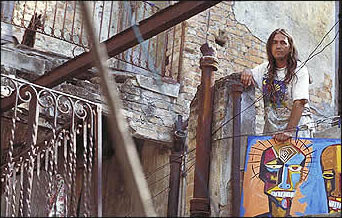 ...
With his very original style, Ponce has succeeded in a very special way in placing his creatures between humor and seriousness, between fantasy and reality. With their double identity, between human being and caricature, these strange creatures are in a world characterized by the tug-of-war between waking reality and the dream state. This gives them the characteristics of both humans and fantasy figures. And even though the grotesque seems to dominate, his figures are always softened by a shimmer of tenderness.
Art as a mouthpiece

Ricardo Ponce is a master of the subtle allusion; he is a storyteller, and, if you look closely at his works, you will find the story. The personal story of the artist or the story of the situation in Cuba.

With impressive honesty and an extraordinary artistic talent, this Cuban artist, who is developing an international following, portrays the difficult situation in Cuba. The political situation and the circumstances of everyday life leave traces behind that are recognizable in the content of his paintings in their coded guise.

The richness of forms and colors that we encounter in the works of Ricardo Ponce shows a fresh pictorial language that evidences no sign of wear from the grinding gears of the business of art in Europe. In many of his works, one can feel the urgency of his distress before so much social, political, and personal misery.

He was born on September 21, 1968 in Puerto Padre, Las Tunas Province. He is a member of the ACAA, the Cuban Association of Artists and Artisans and the AHS, the Hermano Saíz Association. He received his first formal training at the Elementary School of Fine Arts (Escuela Elemental de Artes Plásticas “20 Octubre”) and the Academy of Fine Arts (Academia de Artes Plásticas “San Alejandro”) in Havana.

“Ricardo Ponce’s stature as an artist is impressive. Using his extraordinary artistic talent, Ponce combines the politically schizophrenic life of Cuba in its coded guise with early modern artistic formulas that range from the Art Brut movement to Georg Grosz and Picasso.”