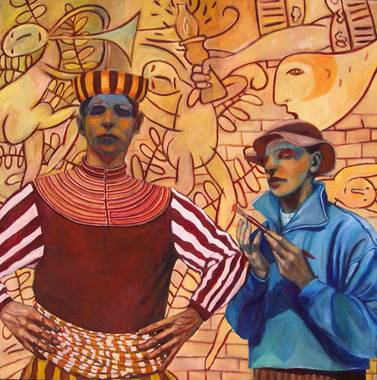 Born in Michigan, the son of a civil engineer, Jonathan Franklin spent much of his childhood in Vietnam, Bangladesh, and Indonesia. After studying art at the University of Michigan, he moved to Israel where he lived on a kibbutz and began painting and working as printmaker. During that period he also served in the Israeli Army.
Besides painting, he enjoys writing, creating set design, and performing in local theater. He also conducts workshops and residencies about art in public schools.
Jonathan resides in Oak Park, Illinois with his wife, three children, and three cats.

My paintings are as much about contrasting patterns, shapes, and colors, about expression, gesture, and costume as they are about the inherent discord that exists between abstraction and realism. I relate to them as visual tableaus: theatrical stages inhabited by actors.
Although on the surface it is the figure that appears central to my work, it is below the surface ---that mysterious tension that pushes and pulls, the line that exists between what is rational and irrational, what is logical and illogical---that fascinates me.
As a photographer sometimes aspires to expose the inner spirit of his subjects, so too do I as a painter. I seek an essence whose spirit exists somewhere between what is revealed in the literal sense and what is concealed in ambiguity.