Some press commentaries to our art- and internetactivities

"10 vor 10" (10 before 10),
Swiss Television DRS
State-run German Swiss Television, 5-minute feature story, spoken in Swiss German
Play Video
It is amazing that the Swiss art dealer Ernst Helbling has succeeded in building a gallery, both in virtual and in actual reality, where the most famous Cuban artists are represented. A spectacular project.

Tagesanzeiger (CH)
The career of the Internet art dealer Ernst Helbling is a success story of the New Economy. Internet businesses have been ailing, but Helbling was able to turn his investment into gold.

Business Week (USA)
SWISS CONNECTION: Helbling has been the first to realize online sales of Cuban art. The paintings are sold worldwide, and American art collectors, in particular, have shown great interest because it is illegal for them to visit Cuba.

"Report", Swiss Television TSI
State-run Italian Swiss Television, 4.5-minute feature story, spoken in Italian
Play Video
Art is one of the few bearers of messages from Cuba, transported by the medium of the Internet – "coded freedom of expression."

Facts (CH)
By using the Internet, Helbling (Nevartos AG) has achieved in a very short time what many art dealers have been trying unsuccessfully for decades. The Internet offerings not only show the works of Cuban artists, but the website offers a cornucopia of information.

"News", Tele Rheintal
Swiss private channel, 3-minute feature story, spoken in Swiss German
Play Video
It is amazing and unique how online art dealer Ernst Helbling is building bridges from the virtual world with an Internet gallery to the real world with exhibits and events. This puts intriguing access to foreign countries within reach.

Merian (D)
Since Castro has discovered art as a source of hard currency, many artists are producing for dollars what Western art collectors want to see. And a few of them actually reflect the reality of life in the Cuba of today: Ricardo Ponce in the virtual gallery artoffer.com

Opening of the first virtual art gallery in Switzerland

Many celebrities from business and industry, culture, and politics were present in the Galerie Nevartos (Zurich) to witness the "virtual inauguration" of artoffer. Without exaggeration, one can say that the design and the information provided are masterful. As Vreni Spoerry, member of the Swiss Council of States (Zurich), said at the inauguration in Zurich, the Internet is truly opening up new opportunities for art. Now, it is possible to be in touch with art at any time of the day or night. Both young artists and masters of their art now have the opportunity to present themselves to a broad audience without borders. 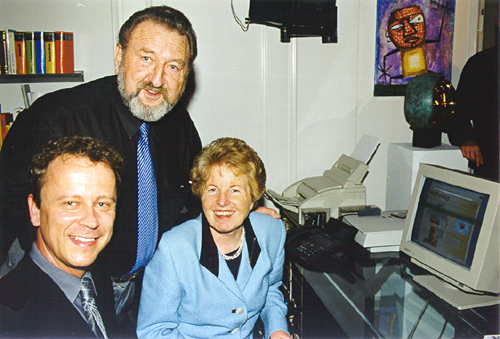 The luxurious apartments in artoffer's virtual house of art are admired by their developer Ernst Helbling (left), artist Ernst Ghenzi, who has "rented" one of the "apartments," and Vreni Spoerry, member of the Swiss Council of States, as their guest.

Der Rheintaler
After the TV news magazine "10 vor 10" (10 before 10) broadcast a feature (from Havana) about Ernst Helbling, whose website has become a hit, journalists have been in hot pursuit of the 34-year-old online art dealer. The online gallery captivates the visitor with its intricate design and the quality of its pictures. It offers artists' portraits, tips for exhibits, art news, and much more.
Basler Zeitung
The operators of the Internet gallery sent out invitations to an exhibit of worldwide significance, and the rooms were bursting at the seams with visitors.
Aargauer Zeitung
The sophisticated and elaborate Internet gallery shows a representative cross-section of current art.
Fricktaler Bote
The Internet is breaking through limits that seemed insurmountable. The website of Nevartos (artoffer) is not just the largest platform offering Cuban art, but it is considered one of the most modern and comprehensive ones worldwide.
Rheintalische Volkszeitung
A visit to Ernst Helbling's online gallery is highly recommended, both in preparation for the exhibit and afterwards to reflect on what one has seen.
Linth Zeitung
The media are showing considerable interest in Ernst Helbling and his Cuban art on the Internet. Since the appearance of this website, interest in Cuban art has grown by leaps and bounds.
Obersee Nachrichten
The Internet sales gallery is a huge success. Within just two months, half of the original Cuban paintings have already been sold. Some content is only in german available.